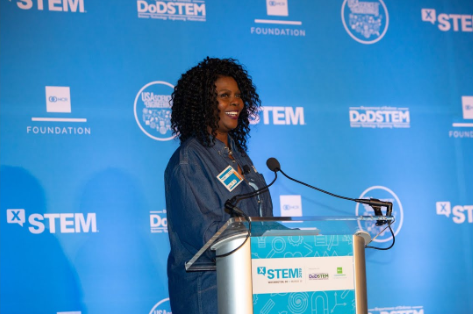 The U.S. Department of Agriculture (USDA) was founded in 1862 under President Abraham Lincoln. At the time, around half of all Americans lived on a farm, and President Lincoln referred to the new department as “The People’s Department.” Today, only about 2% of Americans live on a farm, but the USDA is still responsible for everything from food safety to conservation of natural resources. One woman in STEM doing her part for Americans is the USDA Agricultural Research service administrator Dr. Chavonda Jacobs-Young.

Jacobs-Young was born in Georgia. She moved to North Carolina State University to earn her Bachelor of Science degree in paper science and engineering, which she completed in 1989. She was the classic all-American woman, participating in choir, track and field, and winning the Atlantic Coast Conference High Jump Championship three years in a row. She went on to complete a master’s in 1992 and a Ph.D. in 1998, both in wood and paper science. While completing her Ph.D., she worked as a consultant for Weyerhaeuser, a timber company in Washington state, and as an assistant professor of paper science and engineering for Washington State University.

In 2002, Jacobs-Young was asked to join the USDA as a national program leader for the USDA National Research Initiative, the largest competitive grant program in agriculture in the country. Six years later, she served for two years as a senior policy analysist in agriculture for President Obama’s Executive Office. In 2009, Jacobs-Young became the director of the USDA Office of the Chief Scientist, a department she helped establish. While serving in this role, she helped develop the first USDA Scientific Integrity Policy and reestablished the USDA Science Council. In 2011, she became the acting director of the USDA’s National Institute of Food and Agriculture, managing $1.2 billion in grants for research and education in agriculture.

Today, Jacobs-Young serves as the administrator of the USDA Agricultural Research Service (ARS), a position she has held since 2014. The ARS is one of the world’s best agricultural science organizations and has an annual budget of $1.3 billion. Jacobs-Young has received numerous awards for her outstanding work in agriculture, including the North Carolina State University Outstanding Alumnus Award in 2008, the Federal Laboratory Consortium’s Laboratory Director of the Year Award in 2016, and the 2016 Presidential Rank Award. She’s also an elected fellow for the American Association of the Advancement of Science and the National Academy of Public Administration.

Previous articleOpinion: Why should you care about the SGA?
Next articleRoos Try: Musical Meditation