Between the Lines of a new musical, humor and heartwarming moments take center stage 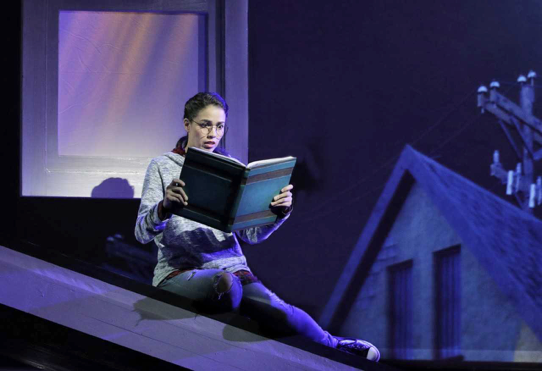 Bestselling authors and mother-daughter duo Jodi Picoult and Samantha Van Leer honored Kansas City by choosing KC Repertory Theatre’s stage to bring their book’s musical adaption to life. Between the Lines, based on a novel of the same name, premiered Sept. 8 and continued to attract sold out crowds a week into its run.

The story centers on Delilah McPhee (Arielle Jacobs), a nerdy, out-of-place teenager starting at a new school after her parents’ separation. In the show’s energy-packed opening number “Another Chapter,” Jacobs’ melodic wistfulness reveals her character’s coping mechanism: She rereads Between the Lines, a fairytale children’s book, to feel transported.

With the first song, the musical immediately establishes its charm: relatability. As a life-long reader, I easily empathized with Delilah, reflecting on times I longed for fictional characters to be real, flesh and blood friends.

In a twist, this wish comes true for Delilah. One night, as she’s reading, the book’s Prince Oliver (Curt Hansen) bursts from its pages, popping through the door with a shocking, operatic “hello!” that drew laughter from the audience. She learns that just as she wants to change her story to have it mirror a fairytale, Prince Oliver yearns to escape his pre-written role and destiny.

It’s an undoubtedly unique premise and this surprising parallel between Delilah and Oliver works to cleverly structure the rest of the musical. The harsh parallels between a nightmarish divorce and a blossoming fairytale romance, or Delilah’s fantastical conversations with Oliver and the bleak, humdrum nature of her high school routine, continue this thread.

There’s also the contrast between life in the book and life in the real world. When Delilah closes the book, the characters get to take a break— a concept that adds whimsy and humor to the storyline.

For example, the queen demands a martini and instructs the other female characters to “unhook [their] bras and let the ladies breathe.” These colorful and unexpected choices allow the audience to see past fairytale caricatures and stereotypes.

Caricatures and stereotypes plague Delilah’s life in the “real world” however. Audience members meet all the high school clichés: the skinny and beautiful mean girl, the dumb jock, the cat lady librarian, the tokenized lesbian.

At times, it’s hard for the clearly talented actors to shine in such wooden roles. Delilah herself is a cliché, despite her general likability and Jacobs’ nearly perfect performance. The lack of nuance made me wonder: When will adults stop using pop culture tropes from “Mean Girls” to prove they know the struggle of high school?

Despite many characters being underwritten and formulaic, it’s easy to feel captivated by their relationships. When Delilah and Oliver sing “In My Perfect World,” in which they narrate how they’d spend a day together if Oliver could escape the book, simple lyrics like “in the morning we’d read the paper and sip our coffees” pack a heartwarming tug. The fact that their voices seem perfectly matched, melding beautifully through each harmony, doesn’t hurt.

The same can be said of “I’m Not Through” and “The Way It Is,” two songs in which Delilah and her jaded mother (Shanna Jones) work to hash out their differences. Lyrics like, “I dislike you now, and then I don’t/You may hate me now, one day you won’t” capture the fluctuating dynamics of mother-daughter relationships, which authors Picoult and Van Leer likely know too well.

Overall, Between the Lines uses a fantastical setting and crazy costumes (you’ll love the dancing mermaid tails… and Prince Oliver’s tights) to assert its message: Real life can be a fairytale.

“Between the Lines” continues on the KC Rep Spencer Theatre stage until Oct. 1. For tickets and more information, visit kcrep.org/show/between-the-lines.