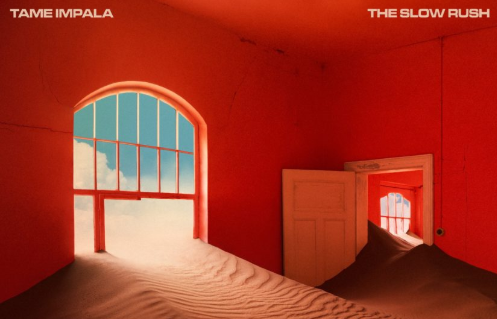 Tame Impala’s newest album, ‘The Slow Rush,’ engulfs you in layers of funky, technicolor sounds and dares you to listen without tapping a foot. This album joins different eras of music together in a unique way that may not be too noticeable at first, but keeps you wanting to hear more.

Kevin Parker, the mastermind behind Tame Impala, is a perfectionist and took his time on this album until he felt it was exactly what he wanted. This is the first album Parker worked on without his previous band members.

Five years have passed since Tame Impala released an album, and the wait was worth it. Working with artists like Travis Scott on this album inspired Parker to get out of his own comfort zone and immerse himself in an idea that comes to mind instead of wasting time doubting anything. For this album, Parker did things that made him uncomfortable for the sole purpose of sparking creativity because he feels the most creative when he’s in uncomfortable situations.

“The Slow Rush” is an expansion of the soothing psychedelia of the previous album, “Currents.” Synthesizers and gentle voicings travel with you through each song, allowing you to peek into Parker’s brain.

Songs like “Borderline” radiate high energy with its keyboard rhythms and disco feel. Influences from ELO and Hall & Oates bring together songs “One More Hour” with its space-poppy sound and “It Might Be Time” with a lively bounce.

With the song “One More Year,” Parker brings us to where time and reality are warped. “We’re on a roller coaster stuck on its loop-de-loop ‘cause what we did, one day, on a whim has slowly become all we do,” Parker wails. He’s lamenting about his past, thinking about the future, and seizing the present all as one.

Each song is hearing a story being told and emotions to be recognized. In “Posthumous Forgiveness,” Parker revisits his past with his father and their relationship, saying, “You decided to take all your sorrys to the grave.” As the song sails into the tranquil, more reflective second part, Parker releases any anger he held. “Wanna tell you ‘bout the time, wanna tell you ‘bout my life, wanna play you all my songs, and hear your voice sing along,” as he mourns what life would be like if his father was here.

The track “Lost in Yesterday” portrays Parker’s self-awareness of reliving the memories in the past. In the song, he asks, “Does it help to get lost in yesterday?” as he answers his own question with groovy bass and upbeat sounds to inspire his audience to keep on dancing, free of the past. Parker shares his realization of how reliving the past is more helpful to growth if you choose to accept it, rather than block it out.

“The Slow Rush” is an anthem of moving forward, just as much as it is mourning the past.