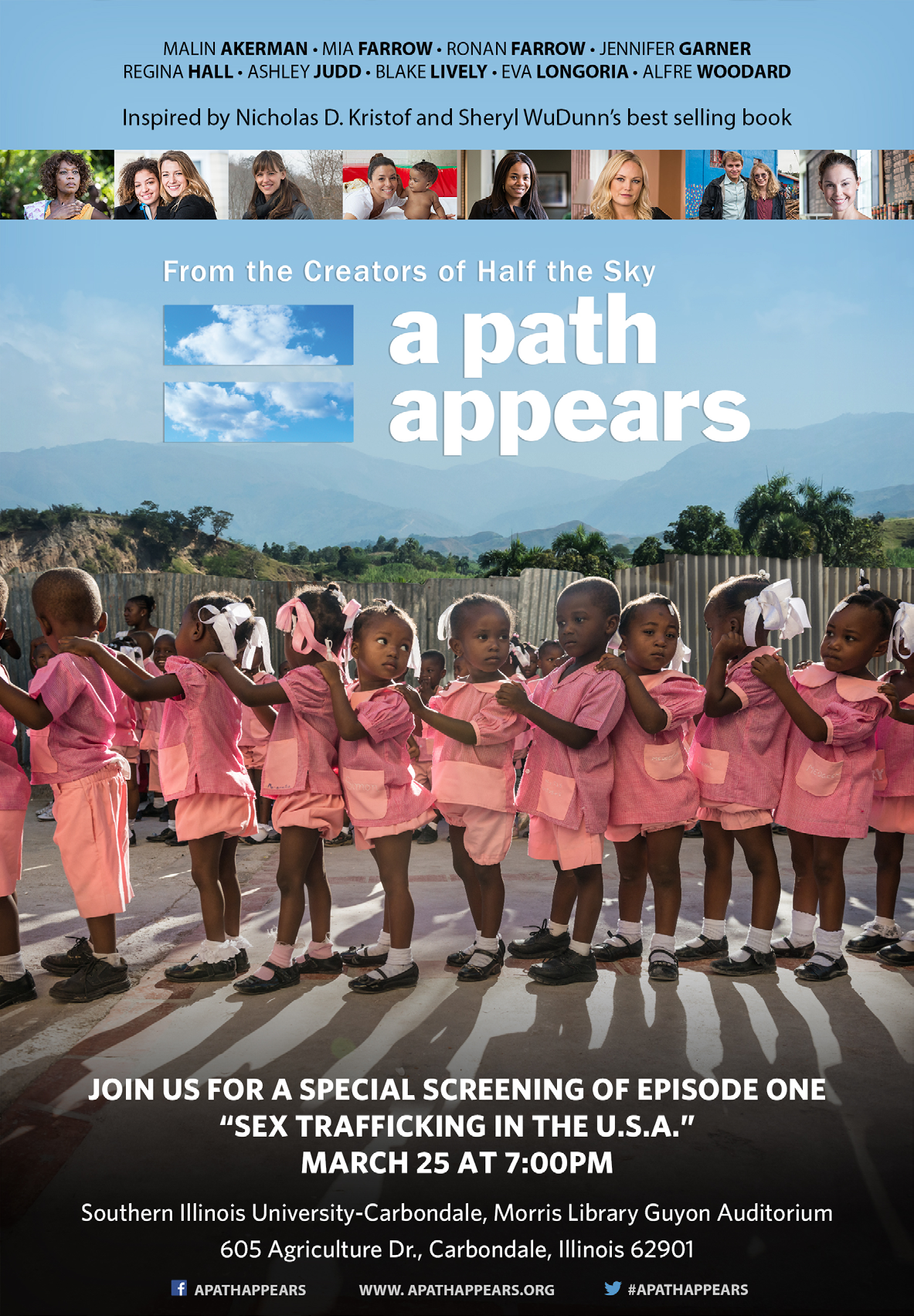 UMKC student and G.R.A.T.I.S. member Marissa Wilson spoke of what the life of a victim of human trafficking is like. “People don’t know a lot about what is going one,” she said. “It’s happening all around us. Kansas City was one of the top cities for human trafficking a couple of years ago.”

The students of G.R.A.T.I.S. held a documentary screening event in the Student Union theatre on Thursday, Nov. 10. The UMKC student organization focuses on raising awareness of human trafficking on both the local and global level.

The event included a brief Q&A with a member from Kansas City’s Restoration House, as well as a viewing of the 2015 film, A Path Appears. The film follows the lives of four human trafficking victims whose experiences drove them to speak on the problem publicly.

The film tells the story of Shana Goodwin, who was only a child when she was sexually abused by her grandfather and sold for drug money by her mother. Sabrina was 6-years-old when her mother taught her how to perform sexually for her boyfriends before being forced onto the streets. Savannah was 12-years-old when she was stalked by a man online and sold to be held in sexual captivity. Maria woke up one day to discover that her missing 15-year-old daughter was being advertised by a pimp online.

The film highlights only a small amount of the hundreds of thousands of victims who are trafficked each year in the Unites States alone. As young girls, they were preyed upon by older men with promises of a better life, if not forced into the life by family members.

“It’s a pimp’s job to manipulate,” one of the women said. “He knew all I wanted was a family and he promised me that.”

It didn’t take long for these girls to realize that the life they were forced into was not all that it once seemed to be. According to the International Labour Organization (ILO), there are an estimated 20.9 million victims of human trafficking on a global scale. Of these victims, 79 percent are subjected to sexual exploitation. With over 80 percent of the victims being women and children, the human trafficking industry generates around $32 billion each year. Victims of the billion dollar industry include but are not limited to run away and homeless youth, foreign nationals who are trafficked into and within the United States, and victims of abuse.

According to the National Human Trafficking Resource Center (NHTRC), victims of physical and sexual abuse are more susceptible to future exploitation due to their violent and traumatic pasts.

The National Human Trafficking Resource Center also reported that the state of Missouri is tied with Washington, D.C. for No. 20 on the list of most reported human trafficking cases in the U.S. last year. Kansas City and St. Louis are known hotspots for human trafficking. Traffickers find it easier to stop in these cities due to the connection between Interstates 35 and 70, as well as the convenience of Interstate 44, though traffickers do not hesitate to move toward other bigger cities.

In September, the United Nations (UN) held a peacekeepers roundtable event in which the problem of UN soldiers trading sex for money was discussed. “We are there to protect the people,” said Colonel Klappe of the Netherlands’ Army. “[The soldiers] need to be held accountable for their misbehaviors.”

In early October, the Federal Bureau of Investigation (FBI) and National Center for Missing and Exploited Children (NCMEC) announced the successful results of what they called Operation Cross Country X in which 239 traffickers and associates were arrested. Over 80 minors were rescued during an effort that ran from October 13 to 16. Officers from Milwaukee, Atlanta, Detroit, and other U.S. cities were involved in the operation. Thailand and the Philippines also played roles throughout the operation. The arrests demonstrate the global impact human trafficking has made and why people should be more aware of the problem.

“These are not children living in some faraway place,” said FBI Director James Comey. “These are our children on our streets, our truck stops, our motels. These are America’s children and they are not for sale.”