David Levy, an accomplished astronomer, donated 60 years of research to Linda Hall Library Thursday night after a presentation on his studies.

The library was full of more than a hundred people listening to Levy’s cheery voice talk about the night sky for over an hour. Levy, a jolly man, was almost giddy when discussing the upper atmosphere, an excitement shared throughout the room. Levy considers himself a socially awkward kid, yet recalled finding comfort within the dark starlit sky. He saw his first comet at age eight, the time he began documenting his observations.

Although the bulk of his research is on the comets, Levy started his lecture with a different celestial body.

“The moon is my favorite object in the sky,” Levy said proclaimed with a grin on his face, as if he knew it went against his life’s works. Levy has this fascination with the creation of the moon and though the moon may be his favorite part of the night sky, the spark in his eye did not die when the conversation switched to comets.

Levy has discovered 22 comets, nine of which he found using a personal telescope in his backyard.

“Searching for comets is an art,” Levy told the audience. The pictures Levy showed during the presentation confirmed his statement about comets being art. Shoemaker-Levy 9 (SL9) is one of Levy’s greatest discoveries. This comet collided with Jupiter in 1994, causing Jupiter’s rings to become wavy. This explosion created a spectacular display in the night sky. 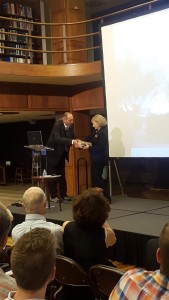 Greatly influenced by Clyde Tombaugh, the man who discovered Pluto, Levy obtained a plethora of academic success stories. An English major, Levy received a Ph. D from the Hebrew University of Jerusalem with his dissertation, “The Sky in Early Modern English Literature: Study of Allusions to Celestial Event in Elizabethan and Jacobean Writing, 1572-1610.” Levy has also been awarded five honorary doctorate degrees from schools all over the United States, as well as Queens University in Canada.

Although the amount of space exploration has been fading in recent years, Levy remained optimistic. He admitted that he often questions the government yet reminds himself that it is the same governing body that put a man on the moon.

“When we as a people really want to do something,” Levy said, “we do it.” All of Levy’s research in the last 25 years has been compiled into 25 books, which now belong to the Linda Hall Library in the center of the Volker campus.